Sonia Sanchez was born in Birmingham, Ala. in 1934. She got her bachelor's degree from Hunter College in 1955 and pursued a graduate degree under the mentorship of poet Louise Bogan. In the 1960s, she worked with the Congress of Racial Equality before hearing Malcolm X and taking a separatist posture instead. She began a career as a professor at Downtown Community School in New York, later moving to San Francisco State College. As a professor, she pioneered in the fields of Black Studies and Women's Studies. She continued to release award-winning books of poetry for young people and adults with a commitment to considering and presenting the Black voice in all her pieces. This is her story.

Ozarks at Large Stories Reflections in Black
Timothy Dennis
Timothy is a life-long Arkansan; he grew up in the hills outside of Winslow and has lived throughout northwest and western Arkansas. As a budding musician in his formative years, he became enthralled with recording technology, which carried over into his collegiate studies of print and multimedia journalism at the University of Arkansas in Fayetteville. Upon receiving his degree in journalism in 2011, Timothy immediately began working as a freelance reporter and photographer for the Washington County Observer in West Fork, Winslow and Greenland. It wasn't long before he left the newspaper business for radio and began working full-time as an announcer and news programmer for KURM AM/FM in Rogers.
See stories by Timothy Dennis 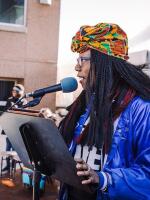