The panel addresses the question of how the white Christian community has responded to racism in Northwest Arkansas in the last several years and how the lack of action on behalf of white Christian church leaders - either to address their own congregations about racism and reparations or to even publicly acknowledge racism or reparations - has left many in the Black Christian community feeling frustrated. Also discussed is Jourdan Anderson, a former slave, and the letter he wrote to his former owner when he was asked to come back to the former owner and help him at the plantation. Anderson's response has become a framework for thinking about the importance of reparations and for our current thinking about where the work lies in addressing and confronting racism, particularly within the Christian Church.

Read Jourdan Anderson's letter to his former owner below and more on his life and writing here. 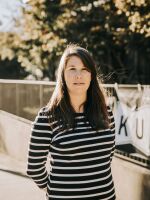 Leigh Wood
Leigh Wood is the General Manager of KUAF. She is also the producer of several KUAF podcasts including Resilient Black Women, The R Word and RefleXions. She also produces and hosts the weekly music program The KUAF Vinyl Hour.
See stories by Leigh Wood