Issues 2 And 3 Find Some Support, But Unknowns Still Large 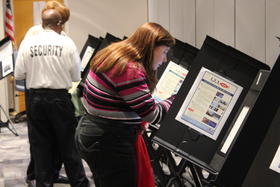 Two legislatively-referred constitutional amendments have found traction with voters although both have a sizable number of undecided opinions.

The questions were phrased in conjunction with ballot title language and descriptions in the proposals.

Among 463 likely Arkansas voters, participants in the poll responded:

Q: Issue 2 is a constitutional amendment that would allow the Governor to retain the powers and duties of the office when absent from the state. If the election were held today, would you vote for or against this proposal?

Q: Issue 3 is a constitutional amendment to encourage economic development. It would remove the current cap of 5% on general obligation bonds for economic projects. It would also allow local governments to obtain or provide money for other entities to support economic development projects or services. If the election were held today, would you vote for or against this proposal?

Issue 1, which would extend countywide elected officials’ terms from two to four years, was surveyed in mid-September and not tested again in this poll. Issues 6 and 7, which center on medical marijuana, were surveyed in the October 21 poll.

Dr. Jay Barth, professor of political science at Hendrix College, helped craft and analyze the latest poll. He offered this analysis of the poll results:

The decidedly more popular of the two is Issue 2, which has no formal opposition. It leads among almost all demographic, political, and geographic groups in the state. A plurality of the youngest group of Arkansans are opposed to the measure. While a plurality of African-Americans favor it, a large percentage of the state’s black voters are undecided on the measure.

Women are also disproportionately likely to be undecided on the ballot measure. Democratic voters are also ambivalent on the issue (43-25% support), while Republicans and Independents are overwhelmingly supportive. Issue 3 is most popular among African-Americans and is least popular among Independents and among Second District voters. Little variation in patterns of support or opposition on the measure are shown across levels of education and between men and women; however, once again, women are more likely to be undecided in their views.

Issue 3 does have a particularly favorable ballot title, but, with both organized support and opposition, it may be tough for the complex amendment to get over the hurdle and gain passage without an effective closing argument from its proponents.

METHODOLOGYThis survey was conducted on October 21, 2016. The poll, which has a margin of error of +/-4.6%, was completed using IVR survey technology among 463 Arkansas likely voters statewide.

All media outlets are welcome to reprint, reproduce, or rebroadcast information from this poll with proper attribution to Talk Business & Politics and Hendrix College.