'Rally For The Rep' A Plea For Support Of Arkansas Theatre 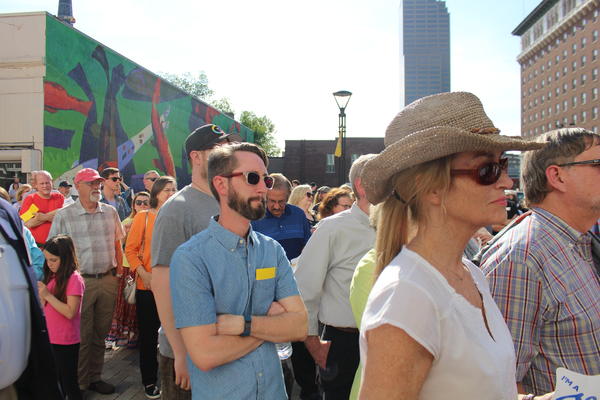 Politicians, artists and fans of the performing arts gathered outside The Arkansas Repertory Theatre building on Main Street to show support for the venue during a time when its future is uncertain. The Rep is Arkansas's largest non-profit and professional theater company. 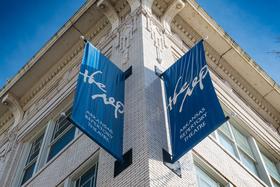 The Rep announced last week it was suspending operations, saying it is facing mounting debt and declining ticket sales. The theatre’s website says its most pressing need is $750,000 to pay off its operating debt.

Little Rock Mayor Mark Stodola announced The Rep as a cornerstone of his Main Street "Creative Corridor" revitalization plan in 2012. He said he was saddened to see the theatre suspend operations.

"Well, [I’m] disappointed, obviously. It’s going to require that they look at and retool some of the capital assets they have," Stodola said. "They own a lot of property, and maybe they need to not own as much. I think there’s a way to look at it and make sure they get some better financial support." 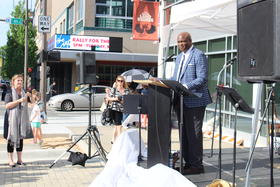 In addition to its downtown theatre space, The Rep owns a nearby workshop and two apartment complexes. Stodola, his mayoral race challenger Rep. Warwick Sabin, Sen. Will Bond and state House candidates Tippi McCullough and Ross Noland were a few of the political figures attending the rally.

Also in attendance was Mary McGowan. McGowan and her daughter Molly McNulty are long-time season ticket holders at The Rep. McGowan hearkened back to the theatre’s humble beginnings in 1976.

"We went to The Rep when it was located on Kavanaugh [Street] when Cliff Baker first started it about 40 years ago," McGowan said.

The theatre’s founding Director Cliff Baker said he hopes The Rep can remain a cornerstone of performing arts in Arkansas.

"Out of every breakdown, there's a path for a breakthrough. And I think that’s what this has given us at the theatre, which is a chance to regroup, rethink, re-strategize and come out of it with everything that you would hope for a professional theatre in your city," Baker said.

The Rep will still fulfill its obligation to host a planned concert series with Ballet Arkansas May 4-6.

Though its last show has already been canceled, Mary McGowan said she hopes this latest push to save the theatre will keep her season ticket valid for years to come.