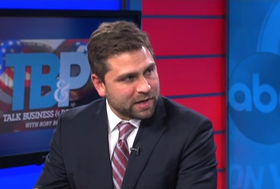 Arkansas Senate President Jonathan Dismang, R-Searcy, said it’s too early in the pre-session process to predict how large of a tax cut may be pushed in the next General Assembly, and he outlined a new agenda item he wants to see reviewed in 2017.

Appearing on this week’s TV edition of Talk Business & Politics, Dismang said until the state’s revenue picture becomes clearer and Gov. Asa Hutchinson puts forth his plans, lawmakers are in a wait-and-see mode.

“We really don’t know what’s doable,” Dismang said. “What we’ve got to do is get the budgets in front of us, or the budget that the governor is going to present, make sure that there’s room within that budget and the revenue that will be coming into the state, and then figure out what the tax cut needs to be. On top of that, we’ve got to make sure there’s a commitment from the members to make cuts if needed from that budget to allow for those additional future tax cuts.”

He said he’s heard colleagues suggest potential trigger mechanisms on certain tax cut plans, but emphasized that any tax reform has to be “predictable.”

“We’re just not in the process or a point in time right now you could stick a figure on and say this is what we’re going to cut taxes by next year,” said Dismang.

The Senate leader also laid out his arguments for opposing a casino expansion initiative and two medical marijuana measures that are likely to appear on the November ballot. All three measures are under court review due to legal challenges.

Dismang said his opposition to casinos centers around crime, local control and the precedent of writing corporations into the state constitution. On medical marijuana, he is troubled by workforce concerns, too many allowances for medical conditions, and opposes the “home grown” provision in one marijuana plan.

He suggested that he may ask state lawmakers to review changes to the ballot initiative process in 2017.

“Even just from the legislative-referred to the ones that are referred by the people, or even if we have a convention, I think we need to look at that process and how easy it is for folks to really buy their way into changing our state’s constitution,” he said.

On Presidential politics, despite the problematic week and overall campaign run by GOP nominee Donald Trump, Dismang said he has concerns, but will remain in the Republican candidate’s corner.

“I’m not with her. Trump was not my choice for the nomination, but again ultimately when I go cast my ballot, I’ll be casting it for him,” he said. “I think there’s absolutely a reason to have pause for concern and really the way he handles himself in a number of different instances, but again, at this point, that’s where I’m headed.”

Watch his full interview in the video below.