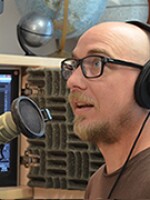 Pete Hartman
Pete Hartman was born in 1973 and had a wonderful childhood in Greenbrier, Arkansas. He moved to Harrison, Arkansas, in 1989 and attended High School there. He then attended North Arkansas Community College from 1992-1994. Pete moved to Fayetteville during the summer of 1994 and began attending the University of Arkansas that fall...within the Journalism Department. By January 1995, he had found his way to KUAF as a work-study student - answering phones and doing clerical work. After learning how to cut audio breaks he soon began working with Kyle Kellams on Ozarks at Large - way back when it was just one episode per week.
See stories by Pete Hartman