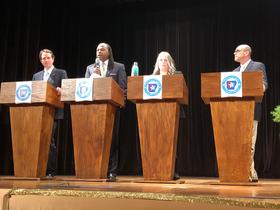 The debate, hosted at Little Rock’s Philander Smith College, was sponsored by the Pulaski County Democratic Party, as well as the Democratic Party of Arkansas and the Arkansas Democratic Black Caucus. Paul Spencer, Jonathan Dunkley, Gwen Combs and Clarke Tucker took the stage for the final hour of the night, preceded by a series of Democratic state legislative debates.

Click the audio link above to hear a recap of the debate. A full video of the debate is available on the Pulaski County Democratic Party Facebook page.

Fundraising totals have prompted speculation over the surety of Rep. Hill’s re-election bid. The winner of the May 22 primary election will go on to face Hill and Libertarian Joe Swafford in the November general election.

CORRECTION: A previous version of this story identified Clarke Tucker as a state senator. He is a member of the Arkansas House of Representatives for District 35.