While Medical Marijuana Stands Before High Court, Patients Steal Away For Therapy From Other States

In Pine Bluff, Levon Lee sits at a table in his garage, the centerpiece of which is a decorative tin filled with marijuana cigarettes. “Matter of fact,” he says, toward the end of an afternoon, “it’s time for me to get to one now. I ain’t had me one all day!”

Lee is one of many Arkansans who would qualify for the state’s legal medical marijuana program but isn't waiting for legal marijuana. In his case, he flies to southern California, to where he had been legally acquiring medical marijuana through a doctor before that state made all marijuana legal Jan. 1. He wouldn’t say how that supply makes its way to his tabletop tin. 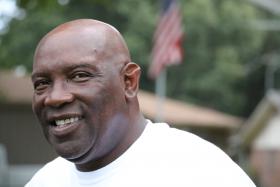 “In my thinking, if you went and got your stuff in Colorado and then drove back, you’d have to come across Kansas and Oklahoma my friend! And that’s bringing a Schedule 1 narcotic across state lines — that’s a federal offense.”

Cross, an ardent Christian, was given a dire diagnosis of prostate cancer, he says. He believes that Jesus Christ directed him toward a low-glycemic diet and marijuana therapy, and, he says, it cured him.

(He outlines the program and its progress at CannabisCancerHealing.com.)

But “it’s a spooky thing,” he says of the illicit part of his cure, “but it’s amazing the doors that open when you’re living right with the Lord.”

Of course, Cross and Lee would have a ready and sanctioned supply if the ballot-initiated medical marijuana amendment in Arkansas was in effect. 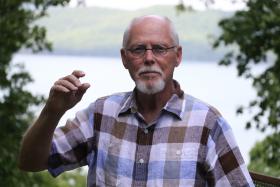 In March, a lawsuit filed against the Arkansas Medical Marijuana Commission successfully stalled the state’s licensing process to pick marijuana growers and retailers.

The health department reported at the beginning of this month that 5,347 Arkansans had registered for identification cards required to walk into one of the state’s eventual 32 dispensaries and acquire medical marijuana.

The department, based on data from other states with established and regulated marijuana sales, estimates that between 20,000 and 40,000 Arkansans will register. 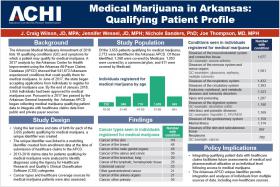 Data from the Arkansas Center for Health Improvement suggests about 500,000 of the state’s roughly three million residents have been diagnosed with medical conditions that would qualify them for medical marijuana under the amendment passed in 2016. Conditions include any kind of cancer, severe arthritis, epilepsy and post-traumatic stress disorder.

The center, as well as the Arkansas Department of Finance and Administration which oversees regulatory aspects of the program (such as licensing), expects as many as eight percent of that number will actually register — 40,000.

Arkansas is uniquely positioned for health care research on medical marijuana, says the center’s health policy director, Craig Wilson. It’s All-Payer Claims Database, begun about five years ago, will be able to compare patients with severe conditions in the state and what treatment they received before and then after the availability of the therapy.

“The major value here in linking this information is that we’ve seen in some national studies that researchers have been able to look at associations between states that have passed medical marijuana and reductions in opioid use,” Wilson said.

The database is a repository of patient information, from demographic details to medical conditions to treatments and their costs. 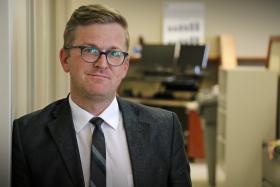 “We’ll be able to measure the impact, whether positive or negative, for individuals who access” the therapy.

Lee, an army truck driver, suffered a bad accident following an explosion during his last deployment to Iraq over a decade ago. He had knee surgeries; his recovery took months.

The pain settled in.

“For me, I have to have [relief], because I hurt every day, all night long, that’s the pain I have,” he says. “Once I smoke [marijuana], it just cools me out, mellows me out.”

“About 14 different kinds of pills a day.”

It left him slobbering, “lookin’ like a zombie,” and it was his wife who finally told him — “enough.”

Dr. Rick Smith is a professor of psychiatry and internal medicine at the University of Arkansas for Medical Science. He is an architect of the state’s new effort, AR-IMPACT, to corral opioid abuse — a coordinated effort between doctors, public health officials and law enforcement.

And he is firmly opposed to marijuana therapy.

“One, I have a problem with the delivery device. Rarely in medicine do we tell people to crumble something up and light it on fire and breathe the smoke.”

Still, opioid abuse is too often fatal, not strictly because patients or addicts can overdose on prescription pills but because the addiction invites consumption of unprescribed and unregulated substitutes (such as heroin and off-market fentanyl).

Marijuana may be ineffective, and heavy use over years may be deleterious, but overdoses are not a public health concern. 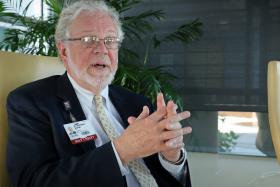 “We have prescription marijuana — marinol,” Smith says. “That’s the active ingredient that we’ve been using quietly for years.”

Accute anxiety is not one of the qualifying conditions for medical marijuana in Arkansas. In fact, only one of the conditions explicitly referenced in the voter-approved amendment falls under mental illness — post-traumatic stress disorder.

“I was taking nine hydrocodones a day, three morphine tabs and a fentanyl patch. I mean, I was a zombie. You know, la-la land. You sit and itch your face lightly because it feels so good!”

There’s a still-darker side to opioids. Lee’s response to the painkillers, when it wasn’t visually inelegant, was emotionally baleful.

“I got to the point where I didn’t even want to live anymore.”

The popular depiction of soldiers back from war is that they become harmful to themselves or others. Lee's veered a bit toward both, but what he suspects is that the treatment of ailments becomes the disease. 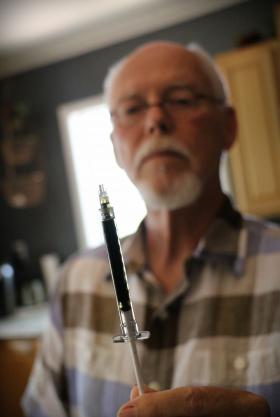 “You got all those different after effects. It ain’t nothing but a time bomb waiting to go off. Someone messes with you, ‘Hey, how you doin?’ Hit you on the shoulder. You fly off like that!

“That anger! That ain’t nobody love me because if they love me why they be doing me this way?"

Marijuana eases his pain and calms his mind. What’s more, it doesn’t steal his senses or the energy he needs to have a productive day.

“You know, as a little boy, I knew marijuana wasn’t compared to [heavy drugs]. I seen people, when I was little, that was smoking it. They never got angry. It was always jolly.”

“It really doesn’t,” Smith counters. “It may make people temporarily jolly, but long term, it doesn’t, [if] we’re talking about big quantities, big use. Staying stoned most of the time.”

In fact, in his practice he pleads with psychiatric patients to cut out marijuana so that he can treat mental illnesses — depression, for example — with more targeted pharmaceuticals.

“We can’t treat depression the normal way if someone’s using marijuana extensively. You have to get them to stop first … it’s a depressant itself,” he says, “and our medicines are just pretty ineffective against large doses of marijuana.”

“And, I don’t know that it actually treats anything except that it may relax people.”

This story is produced by Arkansas Public Media. What's that? APM is a nonprofit journalism project for all of Arkansas and a collaboration among public media in the state. We're funded in part through a grant from the Corporation for Public Broadcasting, with the support of partner stations KUAR, KUAF, KASU and KTXK. And, we hope, from you! You can learn more and support Arkansas Public Media's reporting at arkansaspublicmedia.org. Arkansas Public Media is Natural State news with context.

A quick Thursday roundup includes another hurdle for medical marijuana in Arkansas and recognition for mid-century architecture in Springdale.

The Arkansas Cannabis Industry Association is hosting a training seminar later this month for those interested in working in the state's medical marijuana industry. Corey Hunt, an ACIA board member and event organizer, discusses the importance of training dispensary agents so they are equipped to make recommendations to patients. The seminar costs $149 and will be held Jan. 20 from 11 a.m.

Dr. Tammy Post, who operates a medical practice on Willow Springs Road in Johnson has certified more than a hundred new patients for Arkansas medical cannabis cards. She distills the process and discusses the benefits.

Marijuana And Baby Boomers — Not A Case Of Re-marrying Your Ex, Expert Says

"I think that one of the important things to caution about when thinking about the Baby Boomer generation is that they are often characterized as a bunch of hippies smoking weed and having sex. In reality, marijuana use always was and continued to be something that is done by a small percentage of the population."