The Winding Road to County Judge for Joseph Wood

Joseph Wood is a surprising man in many ways. He was abandoned on the streets as a baby and was eventually fostered and adopted. He nearly became a Catholic priest. He’s a proud alumni of the historically black fraternity Kappa Alpha Psi. He’s a Chicago native Republican. And he’s also the first black county judge in the state of Arkansas. He sits down for an interview to discuss his life and time in politics with the Undisciplined crew. 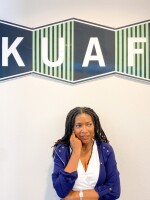