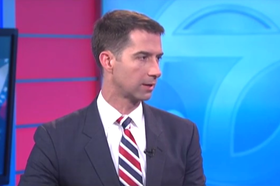 Appearing on this week’s TV edition of Talk Business & Politics, Cotton reiterated his January 2016 message that a $400 million payment to Iran was a “ransom payment” to the rogue nation.

“I say it was a ransom payment because whatever the President and senior administration officials claim, it was done simultaneously with the exchange of hostages,” he said. “More importantly, it’s not what the President says, it’s what the ayatollahs think. And they have said explicitly that they view it as a ransom payment – that they would not have released those hostages without that $400 million ransom.”

The Obama administration announced in January that it planned to settle a legal dispute with Iran dating back to 1979 by paying $1.7 billion to the country for an arms deal that was thwarted after the Shah of Iran was overthrown. Reportedly, Iran paid $400 million for military weapons, but the transaction was never completed due to political unrest and strain despite the U.S. receiving the money.

After years of litigation, U.S. officials announced it would repay the $400 million plus $1.3 billion in interest in January. The Wall Street Journal reported this week that a $400 million cash payment using foreign currencies was made about the same time as a four hostages were released from Iran back to the U.S.

Cotton said it was “deeply worrying” that the money was given in foreign currency cash.

“Why do drug dealers and drug cartels and human traffickers and criminals deal in cash? It’s because they want to evade the banking system. If this money had been transferred, it would have been easier to trace,” he said.

Cotton also said he was unsure if the U.S. owed any remaining money to Iran as part of the $1.7 billion arms deal from the 1970’s.

“I don’t know yet whether there’s $1.3 billion left,” he said. “The administration has continued to dissemble and stonewall Congress on these very questions. In January, we were asking these questions.”

TRUMP SUPPORTCotton is a supporter of Republican Presidential nominee Donald Trump, although he has taken issue with several controversial positions and statements made by the GOP standard-bearer.

When asked if the Trump campaign is moving in the right direction after a string of controversies this past week ranging from attacking a Gold Star military family, comments on Russia, rigged American elections, and hesitating endorsements of Sen. John McCain or House Speaker Paul Ryan, Cotton said:

“Based on that litany of stories, it’s not. Here’s what we should have focused on in the last week. Last Friday, we had a new economic growth report that confirmed that the Obama era economy will be the weakest economy since World War II,” he said. “On Sunday, Hillary Clinton lied about the lies she told about her email server. And on Tuesday, we learned that the Obama administration had paid $400 million in ransom for hostages.”

“Those are the issues that should be driving debates in the Presidential campaign and in Senate races all around the country. And Donald Trump would be well-advised to get back to the issues that Americans actually care about, not going off on tangents and offending some of the people who have sacrificed the most for this country,” Cotton added.

Calling Trump “unconventional,” but the “best choice,” Cotton said he’s confident that America would be “safer and more prosperous” under a Republican President and Congress.

“I’ve had a lot of disagreements with Donald Trump. I’ve disagreed with him on the merits of issues – like some of the statements he’s made about NATO or our alliances with South Korea and Japan. I’ve disagreed with some of his style, some of the comments he’s made over the last week. But in the end, I think the country would be safer and more prosperous if Donald Trump is our President and Republicans are elected to Congress,” Cotton said.